All you need to know about hangover 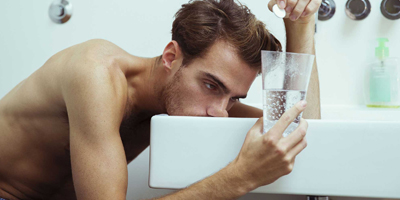 A hangover is the worst painful experience, which caused by the brain shrinking effect that occurs when dehydrated. Less water makes the brain shrink, but how can the brain be dehydrated due to alcohol drinking? There is a logical reason behind it.
A hangover is anything that just about all of us have encountered at some point in time. After spending a night out drinking, you may wake up in the morning with your head feeling heavy and your stomach in knots. At that moment, you probably decided that you would quit drinking, to prevent this awful feeling from happening again. No matter how hard you may have tried though, chances are that it happened again. Hangover occurs after drinking alcohol because the consumption of alcohol results in water being removed from your body via urination. It produces a higher level of urine, which usually can lead to dehydration. The symptoms of the hangover are dry mouth, headaches, fatigue and Nausea. Whatsoever it is but, the hangover is actually satisfied. The motive of alcohol consumption is to get satisfied intoxications.

* Your genetics play a crucial role in the hangover. The body has its own way of breaking down substances indigested. Some people have a slow metabolism to break down alcohol and it’s by – products while others have fast. Certain genes like aldehyde dehydrogenase helps in breaking down the toxic alcohol. Some people don’t have enough of this enzyme, which heighten the hangover.

* Alcohol can make your brain dehydrated. You experience extreme headaches due to alcohol. When you have hangover means that your brain is dehydrated. So if you are drinking a bad quality alcohol in a huge amount, then your body probably will get dehydrated because you will lose a huge amount of water in the body. You will sweat more and urinate more often, which results in dehydration. So, if you don’t want to experience worst hangover, then you need to consume a good quality alcohol which benefits your skin.
Analyzing why and how a hangover was caused is essential to preventing them from happening in the future. Once you have realized the mechanism for how you wound up so hung over, you must then concentrate on what worked for you in your hangover state. Those who reflect on their experience tend to not repeat it in the future. Hangovers are embarrassing, debilitating, frustrating and simply heinous. There are many ways to stop them through analyzing your body chemistry and the way you associate with specific and general types of alcohol, through creating boundaries or limitations of what you can drink, and by figuring out your “point of no return” when you have had too much to drink.